The 34th Grandmaster of 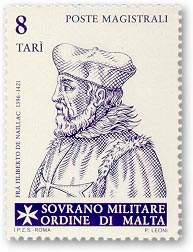 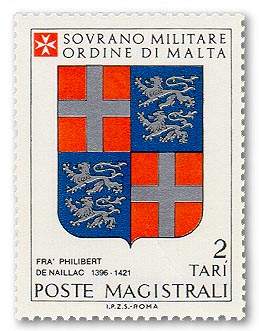 Sakellarios Karagiannis sent this information via e-mail on 6th November 2007:

The Historic Tower of Naillac

It was the summer of 1421 in Rhodes when the death of Grand Master Filiberto di Naillac was announced (1396-1421).  He was French, polite, noble, and the ninth Grand Master of the Order of the Knights of Rhodes.  Most historians refer to him as a calm, honorable man with an exceptional personality.  The knights and all the people of Rhodes mourned for the Grand Master who was responsible for the construction of many great structures and conquests for the knights, the Pope, and many kings of Europe.  He conquered many barbarians from the East, Smyrni, and other areas.  He built many castles in the city of Rhodes, on all the islands of the Dodecanese, a huge fort-prison, and a church at Halicarnassus, today Boudroum in Asia Minor.  The most famous structure built by the Grand Master was the Tower of Naillac which does not exist today.  Many authors described it as the most beautiful tower in Rhodes and the entire east Mediterranean.  It was located close to the area Colona near the Gate of St. Paul.  The tower was extremely well-built and beautiful and was constructed to protect the commercial port of Rhodes.  Historians refer to the tower with three different names: the Tower of Naillac because it was built by Grand Master Filiberto di Naillac, Arap Koule because it was built using slaves from Africa, and the Tower of St. Michael.  Today, the name which prevails is the Tower of Naillac.  Built in 1400, the tower consisted of three floors standing at a height of 49 meters.  At the peak of the tower was a light house with such great light capacity that it was able to shine light upon all the houses, the sea, and up to the coast of Asia Minor.  The tower stood until 1863 when it fell due to a massive earthquake.  Today, the foundations of the great tower can be seen in the sea or nearby area.

Connected to the Tower of Naillac was a massive chain.  Each night, this chain was used to block the entrance of the harbor and the city of Rhodes from intruders.  Each link of the chain measured 45 cm in length.  Up until 1843, the chain was in Rhodes, but shortly after that time, the Turks sent it to Constantinople.  Today, the chain is an exhibit in the museum of Constantinople.

Another chain extended from the lighthouse of St. Nicolas all the way to the commercial harbor.

Every floor of the tower had a great number of canons and other types of weapons and each day and night, many knights and Rhodians stood watch in order to guard the commercial harbor from enemies.

A combination of the tower, its chains, the canons, and the extraordinary military training of the knights made the harbor and city of Rhodes one of the most fortified places in the world.

On each side of the tower, the coat of arms of the knights was displayed.  Smaller towers upon the tower further fortified the area, adding to its beauty and discouraging enemies from attempting to invade.

All the great geographers and travelers who visited Rhodes during this time witnessed and described the magnificent tower.  Most of them write of the Tower of Naillac, which was the most beautiful and powerful tower of Rhodes and the entire Dodecanese from 1400 up to the great earthquake of 1863.