The 73rd Grandmaster of 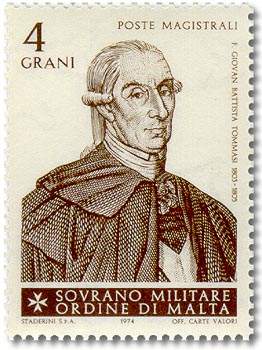 (XIX century) MEMORIAL TO GIOVANBATTISTA TOMMASI GRANDMASTER OF THE ORDER OF MALTA
In the same apse of the cathedral of Santa Maria Assunta, under the pavement of the left chapel are the tombs of the noble family Tommasi to which Cortona owes much of its history. To his commonly recognized merit, GiovanBattista (1731-1805) assumed the title of Grand Sovereign Master of the Order of Malta in 1803 and died in 1805 in exile in Catania after the island, dominion of the Cavalieri from 1533, was conquered by Napoleon.
GiovanBattista Tommasi was buried in the cathedral of Catania but in Cortona a marble memorial was dedicated to him. As there was no room available in the Tommasi chapel it was placed on the left wall at the back of the church.
The monument is the work of the Florentine sculptor Luigi Nencioli.