Saint of the Order of Malta 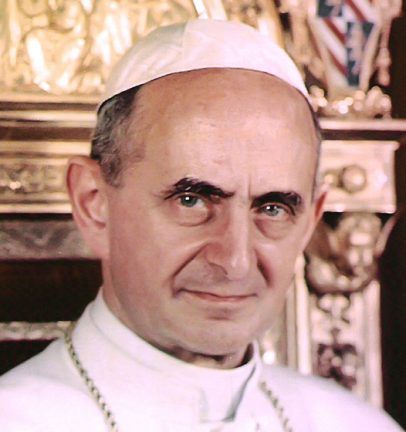 Giovanni Battista Montini was born in Concesio (Province of Brescia) on 26 September, 1897 to a devout family.
He was ordained to the priesthood on 29 May, 1920; and served the Holy See up until 1954 when he was named Archbishop of Milan.
Elected as Supreme Pontiff on 21 June, 1963, he brought the Second Vatican Council to a successful conclusion.
In many ways he gave himself to dialogue with the contemporary world and promoted the image of the Church, "expert in humanity", called to spread a "civilization of love" brought by Christ.
He died 6 August, 1978.
In 1937 he was made Knight of Magistral Grace in the Order of Malta, and raised to Grand Cross in 1938; in 1956 he became a Bailiff Grand Cross.
Paul VI was beatified on 19 October 2014 and canonized on 14 October 2018.

O God, the source of life,
who have revealed the mystery of your sainthood and peace
to your servant, St. Paul the Sixth,
grant, we pray, that,
instructed by his example,
we can acknowledge your Son Jesus Christ
to be the sole Redeemer of the human race.
Who lives and reigns with you in the unity of the Holy Spirit,
one God for ever and ever.
Amen.

(From: The Missal of the Sovereign Military Order of Malta, San Francisco 2016)