Intervention of the Sovereign Military Order of Malta to the General Assembly of the World Conference Against Racism, Racial Discrimination, Xenophobia and Related Intolerance

Introduction by: Rev. Father Gérard T. Lagleder, M.Th., O.S.B., Magistral Chaplain of the Sovereign Military Order of Malta, President of its Relief Organisation in South Africa and Representative of the Order to this World Conference.

Madam/Mr. President of the World Conference,
Your Excellencies, Heads of State and Governments,
Distinguished Heads of Delegations and Delegates,
Dear Sisters and Brothers,

Allow me to start our address in Zulu as a reverence to the mother tongue of most of the inhabitants of our hosting city: Durban.

Intervention by: Professor Dr. Mark J. Wolff, B.A., J.D., LL.M., Knight of Magistral Grace of the Sovereign Military Order of Malta and Representative of the Order to this World Conference.

As we conclude this year the twentieth anniversary of the 1981 “Declaration on the Elimination of all Forms of Intolerance and of Discrimination Based on Religion or Belief”, and approach the international consultative conference on school education in relation to freedom of religion and belief, tolerance and non-discrimination to be held in Madrid November 23rd to 25th, 2001, it is disheartening to observe the increase of religious intolerance in many regions of the World.

Since 1987 special Rapporteurs of the Commission on Human Rights have been examining the problem of religious intolerance. Since 1987 reports have been submitted each year to the Commission and since 1994 to the General Assembly. While some progress has been made the studies and reports reveal a disturbing trend exacerbated by additional factors complicating and compounding the issues and practices of religious intolerance.

The right to freedom of religion is a fundamental human right. It is an inherent right of every human being and is an essential expression of the human spirit, protecting and enhancing the dignity and individuality of each person created in the image of God. Yet as we begin the Third Millennium religious intolerance remains an increasing and pervasive problem with historical roots in social, cultural and religious traditions. Today religious intolerance is co-mingled with new and alarming phenomena.

Extremism in any manifestation is incompatible with the elimination of racism, racial discrimination, xenophobia and related intolerance; particularly when combined with extremist religious and political organizations.[1] History and unfortunately our contemporary world are replete with holocausts and ethnic cleansings that have occurred in the name of religion and perpetrated by extremists utilizing religion as a scapegoat. According to the excellent report submitted by Special Rapporteur Mr. Abdelfattah Amor on Civil And Political Rights, Including Religious Intolerance to the Commission on Human Rights minorities[2] and women are predominantly vulnerable to extremist religious organizations. (E/CN.4/2001/63, Feb. 13, 2001) These extremist organizations utilize a variety of means of intimidation including, aggressive proselytism, harassment, threats, direct or indirect legal restrictions on religion and beliefs, physical violence and murder as has tragically occurred recently in many parts of our world. But extremist organizations do not operate effectively without active or tacit support from local or state governmental authorities.

When both religious intolerance and discrimination against already vulnerable minorities intersect, the offences are not merely cumulative but rather create a new and even more devastating violation of human rights.

Our delegation believes that in order to achieve the elimination of religious intolerance preventative long-range measures must be implemented, in particular through education. The youth of the world must be educated, at the earliest levels, to respect the rich diversity of genuine religious beliefs held by mankind. The beauty of a quilt is comprised of the unique and genuine nature of each thread – an appreciation of the diverse religions of the world enhances the fullness and completes the potentialities of the human being – religious intolerance and discrimination reduce, confine, subjugate and degrade civil society and human dignity.

As recently stated by Wilfred Cardinal Napier of Durban: “We must take upon ourselves the sins of world racism and religious intolerance.”

We call upon all leaders of institutions, governments, religions and civil society to engage in a respectful dialogue with a view towards achieving the goals of this World Conference to end racism, racial discrimination, xenophobia and related intolerance.

We must take positive action to assure that every human being will reach his or her divine destination in dignity, freedom and peace.

[1] As pointed out in the Report submitted by Mr. Abedelfattah Amor, Special Rapporteur to the Commission on Human Rights (E/CN.4/2001/63) at page 45 “The dividing line between religious and faith-based communities and political-extremist organizations is vague and sometimes non-existent.”

[2] See. Declaration on the Rights of Persons Belonging to National or Ethnic, Religious and Linguistic Minorities. 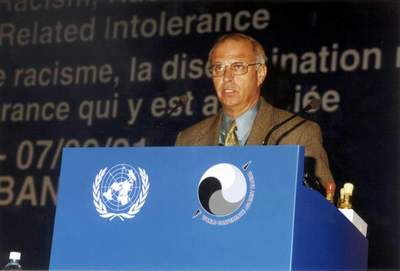 This page is part of the Newsletter No. 21 of the Brotherhood of Blessed Gérard

Back to the Homepage of the Brotherhood of Blessed Gérard