The Relief work of the

Emergency Corps of the Order of Malta
(ECOM)

for victims of the

supported by the South African Relief Organisation of the Order of Malta, the 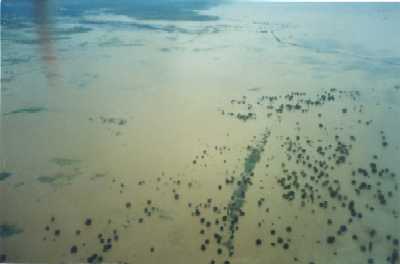 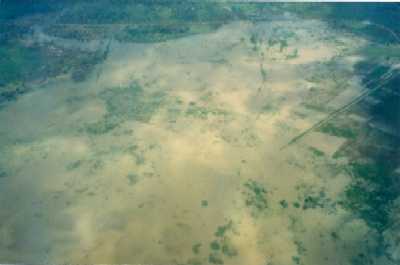 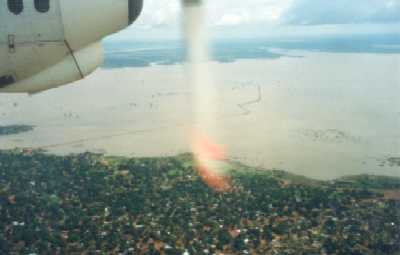 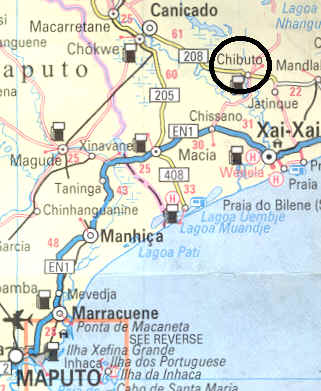 Medical Care: ECOM has erected a field hospital / dispensary to assist several thousands of displaced people medically. They supplemented the services and worked closely together with Chibuto Hospital.

Water purification: The Austrian army had taken on the huge task to provide the people in the Chibuto area with clean water. They had produced more than a million litres of drinking water by 30 March 2000. When they left the area in April 2000 there was a major urgency to substitute their service. ECOM planned to drill a borehole there to avoid that people will return to consume unclean water and get sick.

School: ECOM had identified the need that the children in the camp must continue their school education, not only to keep them out of mischief, but also to avoid the disadvantages of an interrupted education. The Austrian army had constructed a bush school and ECOM organised its running and the teaching aids. Among the displaced people were local teachers, who volunteered do do the teaching.

The Brotherhood of Blessed Gérard as the South African Relief organisation of the Order of Malta has been asked to support the activities of ECOM. We happily have provided them with one of our 4x4 emergency vehicles for transport and we provided them with big tents, field beds, medicine boxes, tables, chairs and administrative equipment for their field hospital. 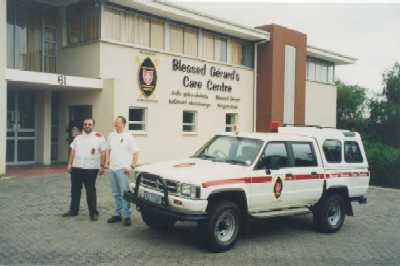 Handing over our emergency vehicle to ECOM teamleader Karsten Eigenbrod at Mandeni, RSA 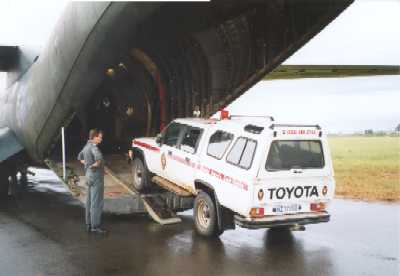 The German Luftwaffe transported our emergency vehicle to the disaster area. 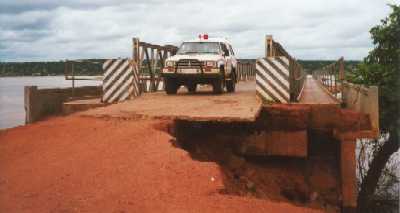 Bridges were destroyed, roads swept away and even with a four wheel drive vehicle transport was a major problem. 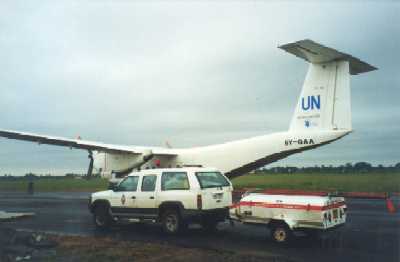 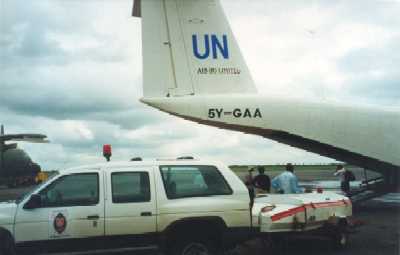 Loading of the relief goods into an UN airplane 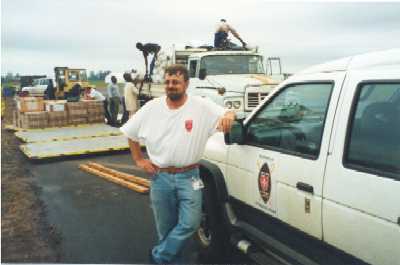 Karsten Eigenbrod and Father Gérard shortly before takeoff to Chibuto 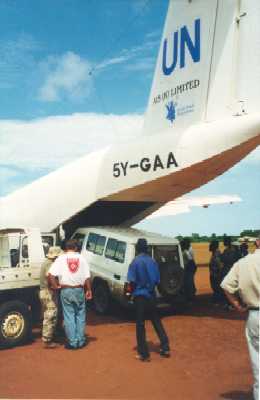 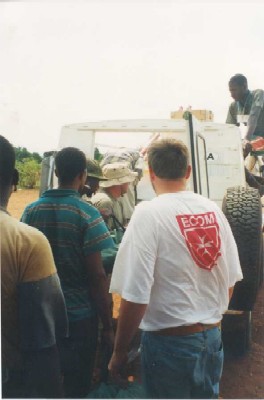 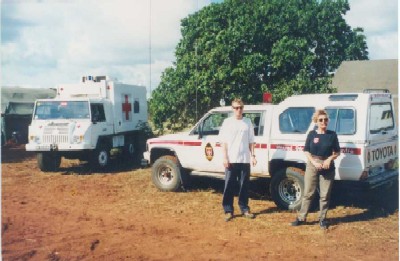 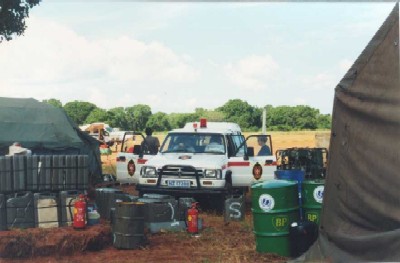 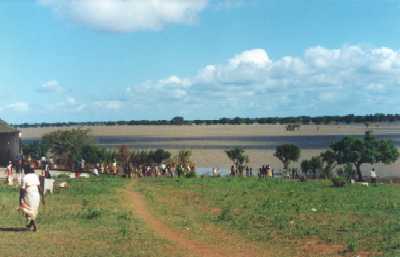 The Limpopo river changed into a massive lake 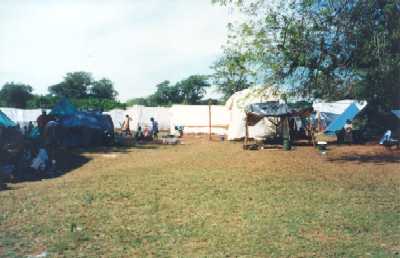 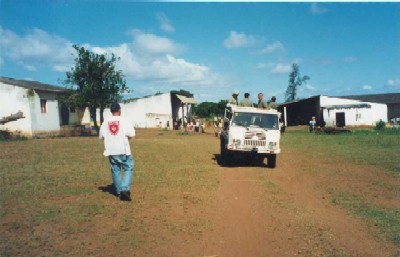 unused buildings of a former farm 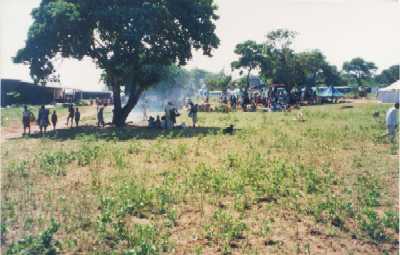 or just in the shade of a tree 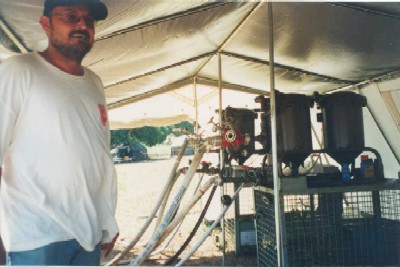 The Austrian army took over the water purification 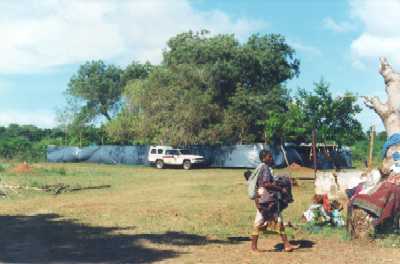 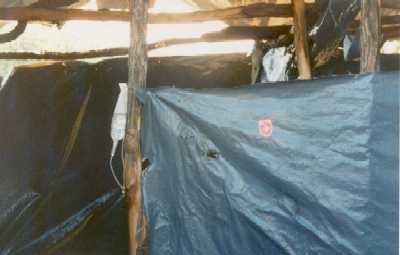 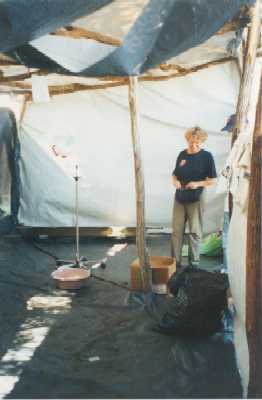 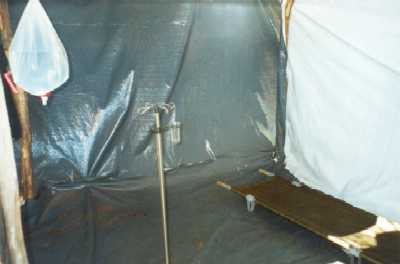 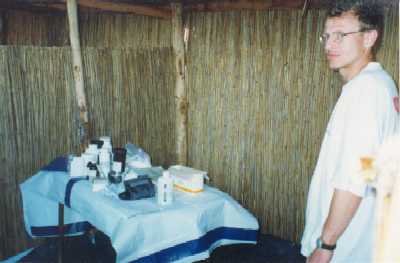 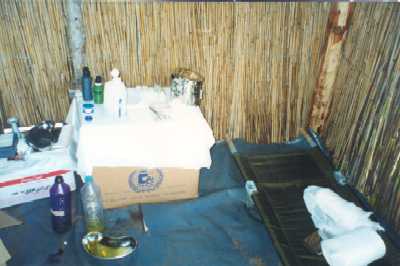 in the "treatment room" 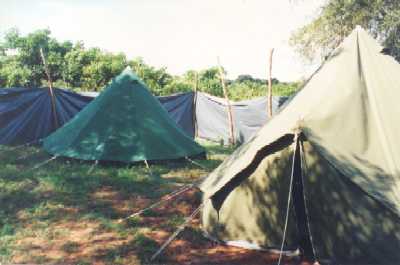 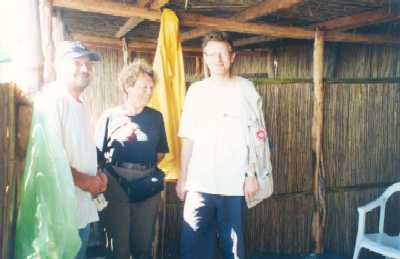 The ECOM team had to start their work with the bare minimum of supplies. The Brotherhood of Blessed Gérard is proud, that we could enhance the efficiency of their work through lending them an emergency vehicle and supplying them with proper medical tents, field beds, Medicine containers, tables and chairs and administrative materials.

Dallas News reported on 19.03.2000: "CHIBUTO, Mozambique - Despite a massive multinational effort to distribute food to Mozambican flood victims, thousands of people are going hungry, aid workers said Saturday. An estimated 360,000 people, driven from their homes by the worst floods on record in this southeast African nation, are housed in aid camps in central and southern Mozambique." 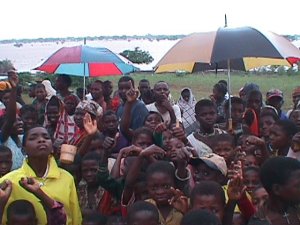 Chibuto camp, 100km north of Maputo.  The water in the background is over 2 metres deep.  This was previously agricultural land."

reported on 28.02.2000: The latest flood hit Chokwe Saturday night, and left many residents of the town clinging on to rooftops and trees for survival. The waters running rapidly down the flooded Limpopo Valley, hit Chibuto district Sunday.

How you can help us to help:

Please send your donation to:

If you live in the USA:

Thanks to the generosity of the Benedictine Mission House in Schuyler, Nebraska, we can now offer you a convenient way of making donations towards our work, inside the United States, with the possibility of declaring your donation on your tax return.

Cheques should be made out to "Benedictine Mission House" with a remark "Brotherhood of Blessed Gérard, Flood relief Mozambique" (Please do not forget this!)

People who have made a donation of more than $200 will receive a tax certificate immediately from the Mission House and donors of smaller amounts would receive one at the end of the tax year, if they want to declare their donations on their tax returns.

Links to our project partners: 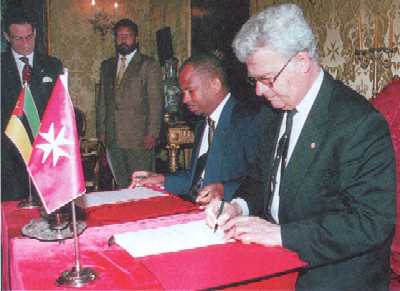 Rome. Magistral Palace. The signature of the protocol for diplomatic relations and the exchange of ambassadors between the Republic of Mozambique and the Sovereign Military Order of Malta. In front, the Grand Commander Ven. Bailiff Frà Ludwig Hoffmann, and the Ambassador of Mozambique in Italy, Amadeu Paulo S. Da Conceicao, during the signature of the diplomatic agreement.

Back to the homepage of the Brotherhood of Blessed Gérard